I caught up with my friend Laura, set designer and illustrator (see her beautiful hand painted stationary here) during my stay in Perth. Laura’s illustrations recently feature botanical motifs so I invited her to come along with me to view some of the earliest illustrations of native flora in Kings Park held at the State Library.

I was searching for the earliest illustrations in the collection and came across three albums by Albert John Hall, an amateur botanical artist who first came to Western Australia from England in 1895. The illustrations were made over the period from 1918 to 1930 and are presented in Victorian postcard albums with accompanying notes detailing the specimen’s name, location and date.

The Kangaroo Paw, a native species to the south-west, is featured in the West Australian coat of arms, flanking the royal crown.

Looking through the volumes of illustrations, the style and level of detail fluctuated, it left me wondering if other artists had contributed to the albums.

Kings Park, is located on Mt Eliza which overlooks the Swan River and the city centre which is less than a mile away. Not many cities have their botanical park in such close proximity to the CBD; it is one of the world’s 34 biodiversity hotspots, home to high numbers of unique species of native flora over a 400 hectare site. That is 1.5 square miles for those who are imperially minded.

A week after photographing the illustrations and maps at the library with Laura, my family and I went to Kings Park for our final get together before returning to the U.K. These are the views from the edge of the park towards the city and Swan River leading out towards Fremantle… 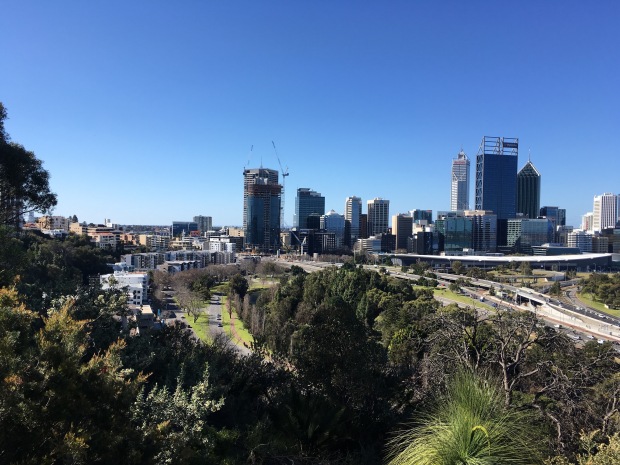 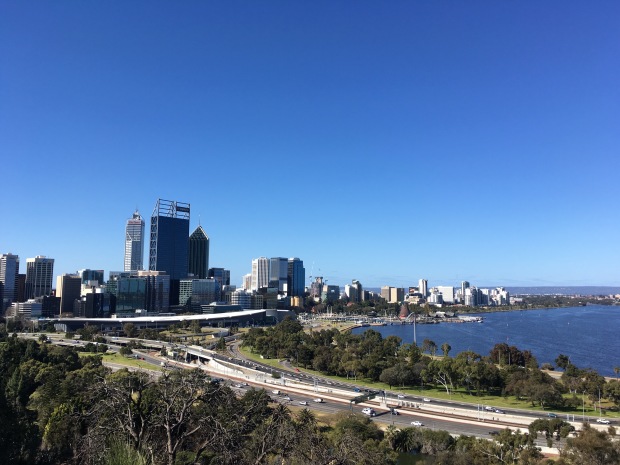 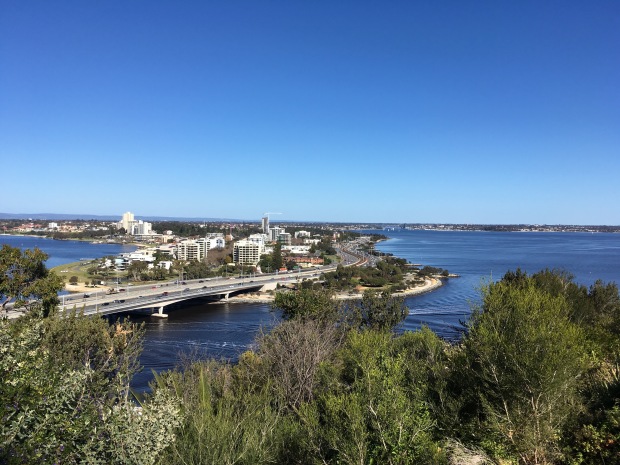 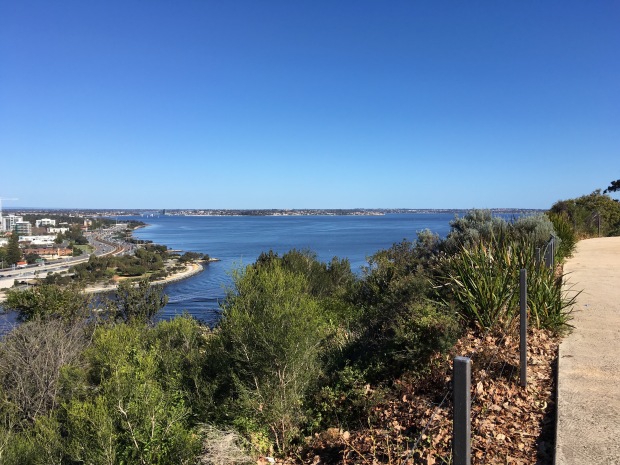 For thousands of years Kings Park was known to the Indigenous people as Mooro Katta or Kaarta Gar-up and was, and is, an important ceremonial and cultural site. In 1831 it was set aside for ‘public purposes’, initially it had been called ‘Perth Park’ but in 1901 it became ‘Kings Park’ to mark the accession of King Edward VII to the British throne.

In my childhood, we would picnic as a family in the park on birthdays or other celebrations (our crammed limousine took us there on prom night). On the day I visited, despite being winter, the park was heaving with tourists, or perhaps avid Pokémon-Go fans. Perth’s characteristic sunshine and blue skies lit up the more ethereal elements of the landscape like these native paper daisies.

You can just make out the charred looking silhouette of a black Kangaroo’s Paw (Macropidia fuliginosa) angling out of the drift of paper daisies in the image above.

Sadly I didn’t have enough time to fully explore the park, concentrating mainly on the periphery before heading back to my sister’s to pack and fly out that evening. Even within this small area there is a massive contrast between the representative landscapes of different West Australian regions that are planted out sympathetically at the park.

The Giant Boab tree below was gifted to the park in 2008 by the Gija people, the traditional land owners in the Kimberley region where the trees grow. It made an epic journey of almost 2000 miles to arrive at its new home. 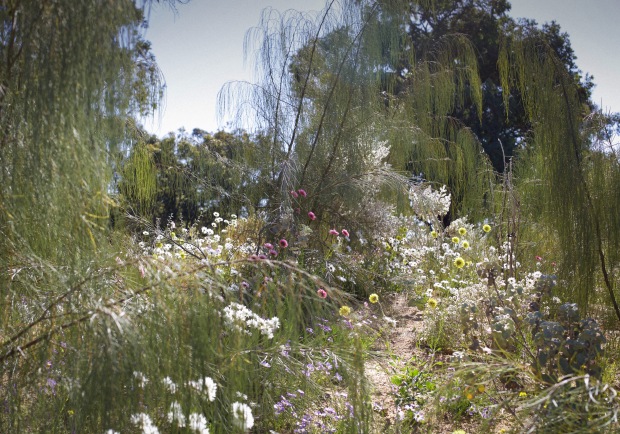 These vignettes of the plants of the Mulga region show the Australian landscape can be ethereal, romantic and delicate and at the same time equipped to withstand the harsh environment and poor conditions.

If you are lucky enough to visit the botanical park, allow yourself at least a couple of days to do it justice. The park shows the beauty of our native flora; slowly I think people are starting to use these plants in their gardens now they can experience them in all their splendour here at Kings Park.

I have been back in my home town this month spending time with family and catching up with friends. Winter in Perth is usually much like summer in England, sunny and not too cold, although this year it has been hotter in the UK and Perth has had one of its wettest winters in thirty years.

Perth is one of the most isolated cities in the world and after living in the UK for seven years now it really feels like it! Although, the solitary feeling when wandering in the landscape is a good thing, I have missed the newspapers, the BBC and being able to walk to the cornershop when you run out of milk.

A place I love to visit is Bells Rapids, about a ten minute drive from my sister’s place. The wet winter it has meant the Avon river is much more rapid than usual.

Bells Rapids flows west from the Avon River in the Avon Valley and winds through National Parks to the east. Just before Bells (as the locals refer to it) the river becomes the Swan River, which continues all the way past Perth’s CBD and then flows in to the Indian Ocean at Fremantle. Every year it is used for a white water rafting race, the Avon Descent, which brings in hundreds of competitors in canoes and kayaks to complete the 124 kilometre race.

The quality of the light is so changeable at this time of year, it can go from a brooding sky to the brightest blue within minutes. The photographs above and below were taken within less than half an hour of each other. 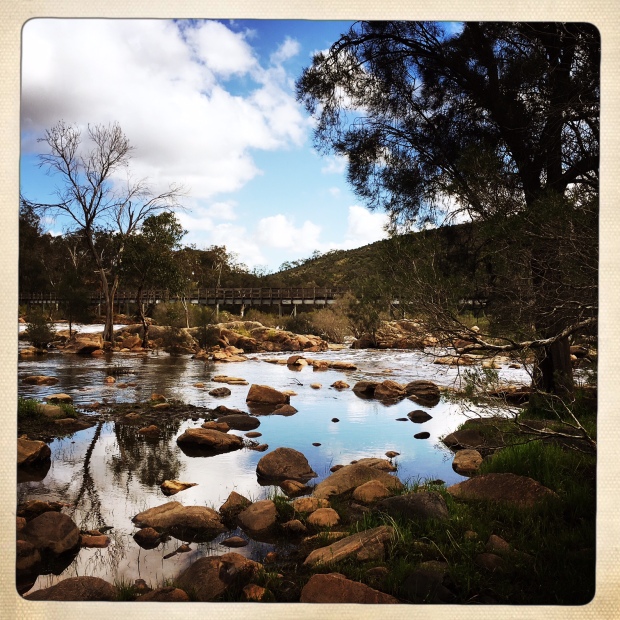 The softness of the fountain grass, pennisetum setaceum, contrasts with the harsh landscape and they become illuminated when the sun hits them at the right angle. 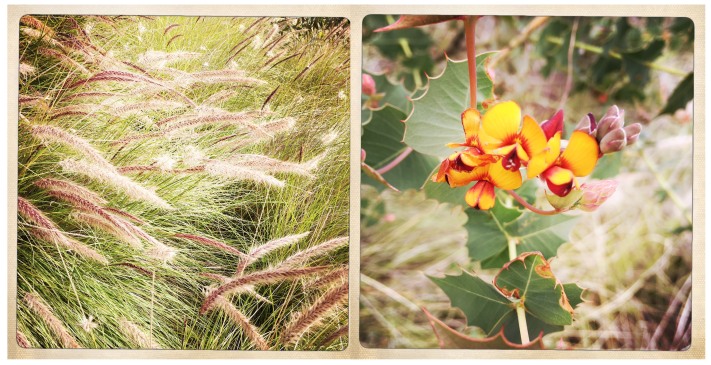 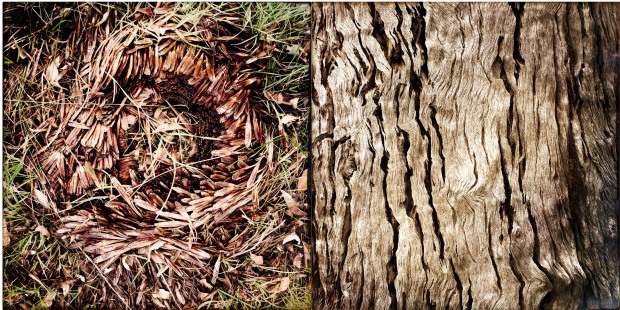 The stump of a native grass tree (xanthorrhoea pressii, or balga; its Indigenous name) and the bark of an old dead jarrah tree (eucalyptus marginata).

My niece enthusiastically encouraged me to jump over the mud and rock pools to get closer the edge of the water, only slightly twisting my ankle several times. 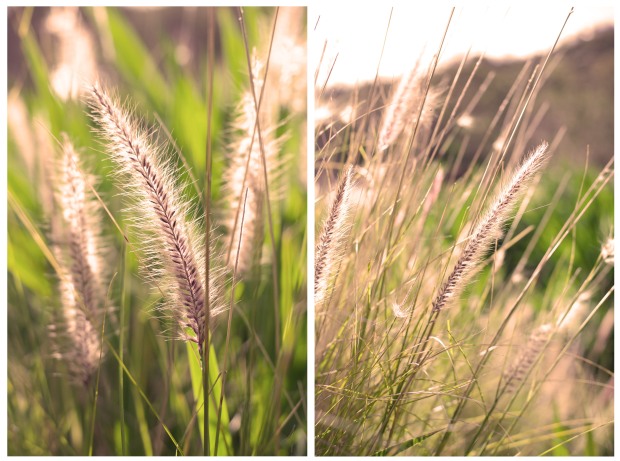 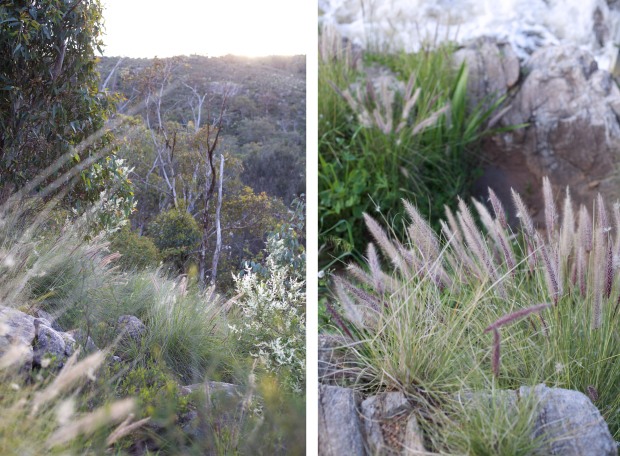 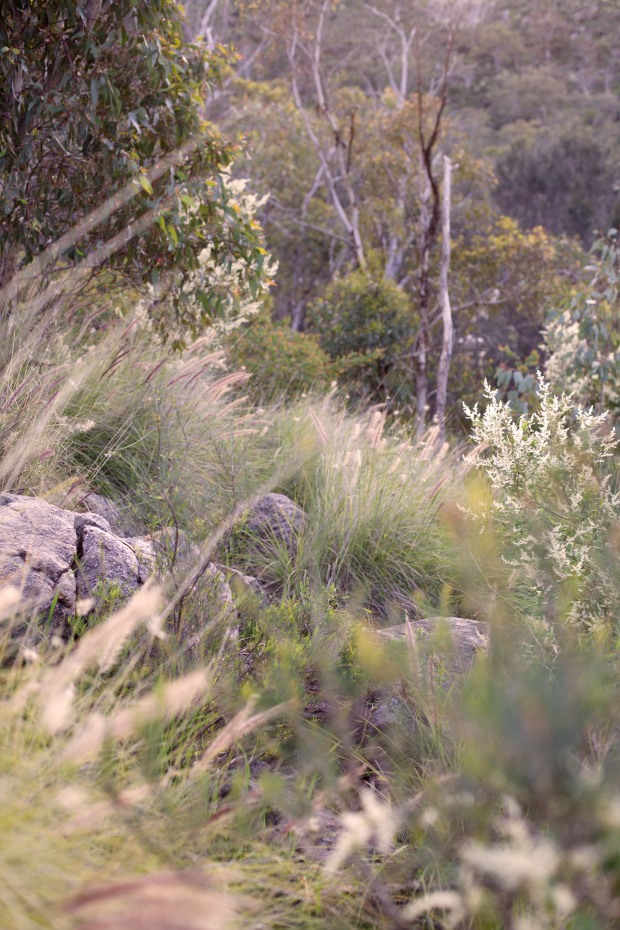 I used to think the west Australian landscape was not very attractive; harsh, dry and drained of colour but I recently have started to see it differently. Particularly at dusk, the soft light transforms the landscape and the colour palette changes completely, from burnt oranges, browns and deep azure blue skies to muted grey, brown, mauve and cream.

The landscape back home in Kent is so predominantly green, coming back to Perth has made me appreciate the colour differences and has heightened my awareness of smaller details. Looking more carefully you start to notice examples of the unique flora, like the burnt reddish black tips of native herb flowers and the masses of tiny, bright orange orchid like flowers amongst the grasses.